The Church of the Multiplication of Loaves and Fishes 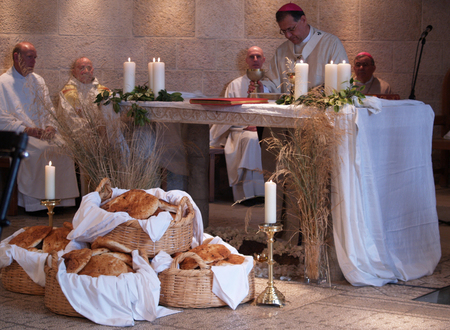 Brotvermehrungsfest The northwestern corner of the Sea of Galilee was one of the focal points in Jesus’ ministry. It is not surprising that those who experienced him kept their memories of him alive and passed them on. For these men and women, Jesus’ message remained part of their Jewish (biblical) faith, in spite of how revolutionary it was.
Many of the archeological sites surrounding the Sea of Galilee suggest that Judaism and early Christianity existed alongside each other before they developed into two separate religions. Evidence for this initial co-existence can be gathered from archeological sites in Tiberias, Magdala, Capernaum, Bethsaida and Tabgha, which sits in the midst of all these sacred sites.

At the end of the fourth century A.D., the Spanish nun and pilgrim Egeria traveled to the Holy Land and recorded her impressions and experiences in detail. Her report mentions a small church built over the rock, where “the Lord fed the multitude with five loaves and two fish.” In the fifth century, this small Syriac church was replaced with a much larger and more elaborate Byzantine structure, possibly to accommodate the rising number of visitors. This church contains the beautiful mosaics depicting animals and plants as well as geometric figures, all of which contribute greatly to the splendor and charm of today’s Church of the Multiplication of Loaves and Fishes.

In the 7th century A.D. the sacred sites around the Sea of Galilee faded into obscurity, including the site of the Multiplication of Loaves and Fishes. With the invasion of the Persians in 614 A.D., many Christian churches and facilities were destroyed, gradually disappearing beneath sand and earth. For centuries neither pilgrims nor archeologists traveled around the lake. Only the Bedouin with their flocks lived there from time to time, putting up their tents on the meadows along the shore. Maybe they didn’t notice the little mosaic stones protruding from the ground while they removed their tent poles…
When the Europeans scholars and churchmen rediscovered the Holy Land in the 19th century, they focused their attention in the vicinity of the Sea of Galilee mainly on finding Capernaum, the town of Jesus. The location was unknown. Property was bought at random, however the German Association of the Holy Land was very fortunate in its purchase of a large plot of land, where the Byzantine church with its beautiful mosaics was discovered soon after.

A New Church with Old Treasure

Only in the 1930s was the site excavated in its entirety. A temporary church was erected for the protection of the precious mosaics, serving its purpose until the 1970s. The construction of a new church was clearly necessary due to the sacred nature of the site as well as to the increasing numbers of visitors. Thus one of the most beautiful churches in the Holy Land was erected on the foundations of the old Byzantine church, in the style of Byzantine architecture. The church has attracted a large number of people from all over the world since its dedication on May 23, 1982. Through the mosaics, visitors to the church are able to engage with a variety of stories from the animal and plant kingdom, but it is the overflowing love of God that becomes most palpable in the simple depiction of the bread basket with the two fish: for all were fed and were satisfied.