100 Year History of a Church

On Reformation Day in 1898, after several years of diplomatic activity, this point had been reached: after Emperor Wilhelm II of Germany had dedicated the German Evangelical Church of the Redeemer in the morning, in the afternoon he handed over the piece of land for Dormition to the German Association for the Holy Land
Enlarge picture 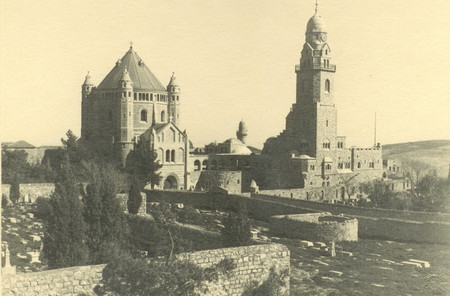 On October 7 the corner stone was laid. Local workers and artisans of every confession, religion, language and culture carried out the building of the new monastery and Marian church according to the plans of Cologne Archdiocesan architect Heinrich Renard. The crypt was finished and dedicated in 1904. Two years later the first Benedictine monks from Germany came to Mount Zion while the building was still going on. Only on April 10, 1910 was the church dedicated. However, even today it has not been completed. Meanwhile many wars and external conflicts in the Holy Land and inner upheavels in the community have caused the the interior to remain incomplete until today.

On April 10, 2010, with many friends from the Holy Land and from Europe we were able to celebrate the hundredth anniversary of the dedication of our church, which in the course of its life was the scene of wars and which has thus become an special place of prayer for peace among peoples. The Basilica of Dormition remains furthermore in its layout and inner design a site for the search for God of our community.

For masses for pilgrims:

For a talk or a meeting with a monk: