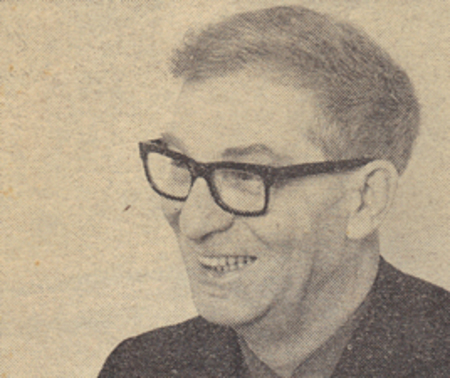 Shmuel Stehman (Foto aus der Zeitung). There was standing room only at the Requiem Mass at the Dormition Abbey Church on Mount Zion on the evening of February 3, for Father Shmuel Stehman, the colourful Belgian Benedictine monk and lecturer who since 1957 had been Israel correspondent of the French Catholic daily La Croix, and who died suddenly the day before at the age of 58.

The significance of this large attendance is perhaps best explained by a quotation from a short and moving eulogy given after the ceremony of the Requiem Mass by Dr. Jacques Lichtenstein, the physician who had treated Father Stehman in his last brief illness:

It is I, a Jew, your brother, who is speaking to you from the Hill of Zion here in Jerusalem. Father Stehman – Shmuel to his intimates –had chosen to accompany the Jewish people in its renaissance on its ancestral soil.
Father Stehman was a man for confrontation: a priest who wished to live among the Jewish people; a man who, after being delivered from a concentration camp, chose to reside in a religious House whose language was German; a man of peace who yet chose to live every day on the frontier. He was a man for bringing people nearer together: a Jew for the Jews, a Catholic for the Christians. All of them considered him as a promise of reconciliation, perhaps even of forgiveness, between the two religions so long in conflict.
Father Stehman was a man of peace, one that continuously pursued peace.

Another telling tribute was broadcast by Father Marcel Dubois, Superior of St. Isaiah House, on the same day on Kol Israel:
Father Shmuel Stehman was one of the personalities who was part of the Christian landscape of Jerusalem – or even more accurately the landscape of Jerusalem. It was in this city, with the consent of the Superiors of his monastery in Belgium, that he chose to live. In an autobiography admirable for its sagacity and humour (the book is soon to be published and through it we shall once more be able to discover him) he recounts his personal pilgrimage, and at the time of the Six Day War he gives us this admirable definition of a Jew:

A Jew is someone who weeps when the Shofar sounds before the Temple Wall.

Father Shmuel was one of those who wept on that June day, from the depth of his sense of belonging. Certainly this was more than sentiment in a man who had known so much uprooting and who had undergone the long winter of Buchenwald.

Each and every one of us who was acquainted with him was gladdened by him, though it is only the few who really knew him. There was no attempt on his part to conceal himself, yet there was Father Shmuel Stehman a genuine element of the mystic about him. He was many-sided: there was his gaiety and cheerfulness; the seriousness of a distinguished writer and artist; and yet again the air of detachment of a genuine monk. He was at all times possessed of a yearning, even of an obsession, for God.

In his book he recounts his presentation of himself at the Abbey. He told the Father Abbot who questioned him on his vocation: “I see no other way for me than the music hall of the monastery.”
All his life he Iived with this dual tension and attained a rare balance between smiling at the beauties of this world – for he was an artist of great talent – and the absolute of prayer, the balance between presence with men and solitude with God. In this regard there is a particular appropriateness in the day of his departure, the Feast of the Presentation in the Temple. This Feast suggests entrance into the Presence, the dominant theme and motivation in the life of Father Stehman.

Now his voice is silenced. It will no longer sound on Kol Israel or in the streets or houses of Jerusalem. But he has left us three beautiful books which, both by the quality of their writing and the revelation they offer us of his true self, will remain as a testimonial. We can hear him again in these lines of a book published some fifteen years ago called most appropriately ‘Le Voyage a l’Ancre’ .

My God, my God, I cannot be alone! I need to be two. My God, be this second, this other, this beloved, this loving one, life of my life, without which I am nothing!

You have enlarged my heart to the measure of the infinite, and it will remain empty, Lord, irremediably, as long as you will not come to fill it with yourself.