In the chapter room of Dormition Abbey.
What began in the Near and Middle East soon found its way to Europe. Martin of Tours (316/17-397) and Basil the Great (330-379) are only two of the best known figures, who left their mark not only on the early church in general, but especially on monasticism in its early period. On their experience Benedict of Nursia (480-547) was able to build.

The Rule of Saint Benedict

After a period as a hermit, Benedict lived in different communities. From this period comes also the “Regula Sancti Benedicti” (Rule of Saint Benedict),

Ikone: Christus Pantokrator and Saint Benedict which he wrote for his community at Monte Cassino. In it he gathered various monastic traditions and organized them in 73 chapters with a prologue, a rule that, with the Holy Scripture as background, was to become the principle authority for western monasticism. It was monasticism of Benedictine stamp, which in its life stile, in its workshops and especially in the monastic libraries, preserved the learning of antiquity and thereby formed and left its stamp on the early medieval Europe. Today there are about 24,000 Benedictine men and women, who live according to this Rule. In addition, Cistercians, Trappists and other monastic communities follow or are inspired by the Rule of Saint Benedict.

Among other things that make the Rule of Saint Benedict so attractive is its concern for moderation and balance: it prescribes times of prayer and times of work for the monks, times of silence and times for speaking. It is concerned with the right measure of food and drink, and remains open to the daily needs of the monks and their human weaknesses. It regulates of course the daily schedule, but remains open to reasonable alternatives. Thus every monastic community must grasp the spirit of the Rule of Saint Benedict and insert itself with its peculiarities into the stream of the colorful monastic tradition.

In order to recognize God Himself

The Rule seeks to create the conditions to enable the life of the monk to have a rhythm in which listening to the voice of God in his life and in the creation becomes easier. “Listen, my son!” begins the Prologue, and so sounds like the “ Sch’ma Jisrael,” the 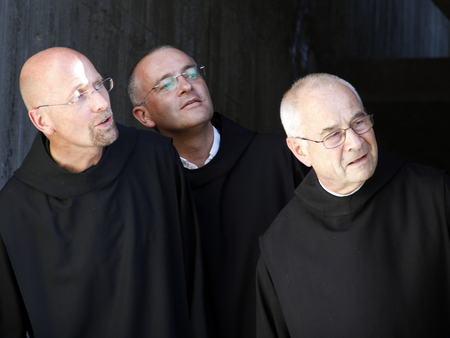 Three monks have a look-around. “Listen, O Israel,” which Jewish worshippers recite twice daily like a confession of faith.
To be tuned in to all that in us and around us speaks and sounds, to what is really important - that is what the life of a monk is concerned with: he lives, he prays, works and reads, in order to recognize God Himself and His traces in our life and our world and to follow them.