In the Service of Peace: 1995 until today

Our older monks who experienced wars and crises: Fr. Hieronymus, Br. Hilarion (1998), Br. Bruno (1992), Fr. Paul (1998), Br. Eduard (2002) In 1995, when the second term of Abbot Nicholas came to an end, the destiny of Dormition was once more hanging in the balance. The economic and personnel situation of the monastery was difficult. The older brothers, tried through various crises, were largely alone, since many younger men had come, fascinated by the profile of the Abbey on Mount Zion, its prayer and work, but almost all had left.

However, the war-tried community took a courageous step and chose a new abbot - Benedikt Lindemann OSB, just 37 years old and the novice master in the Abbey of Könisgmünster in Meschede, when the monks of Dormition elected him as their abbot. He introduced a process of economic and structural consolidation and at the same time built on the foundations of his predecessor.
The number of vocations and professions has grown so that the community at present (June 2011) numbers 16 solemnly professed monks. Several of the younger brothers are preparing themselves for collaboration in the Theological Study Year, in ecumenical dialogue, and for scholarly and cultural work in the Abbey and in the Holy Land. The service of peace, in prayer and practical work, is the special focus of our community and will find a special expression and concentration in the Peace Academy project “Beit Benedict.”

In August 2003 our monastery in Tabgha was raised to the level of a dependent priory. The plans developed since then for a new monastery building, which would permit a stable spiritual life and the growth of the community at the place of the Multiplication of Loaves, are now, since summer 2009, being concretely implemented. South of the famous Church of the Multiplication of the Loaves a new monastery building is rising. 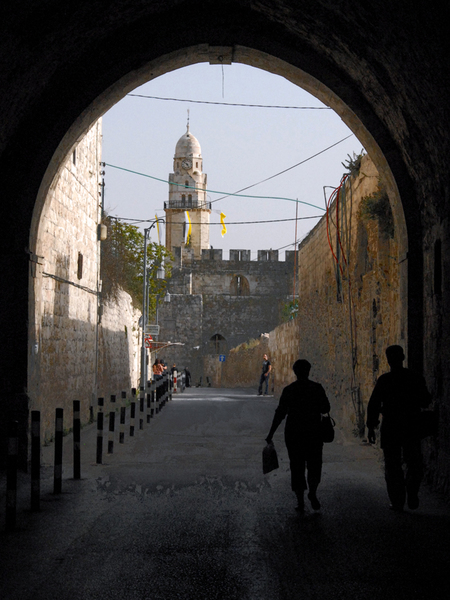 Dormitio Abbey seen at April 10, 2010 from the Armenian quarter. Also since 2003 our community has had an address in Germany and, with the “Jerusalem House” in Hildesheim, maintains a station for making and caring for contacts in Germany.

On March 21, 2006 our community was able to look back over a hundred years of its turbulent history, a hundred years in which, without the blessing and help of God and without the support of so many people, it would hardly have been able to survive. With renewed thanks to God, we were able to celebrate the hundredth anniversary of the dedication of our Marian Church on April 10, 2010.