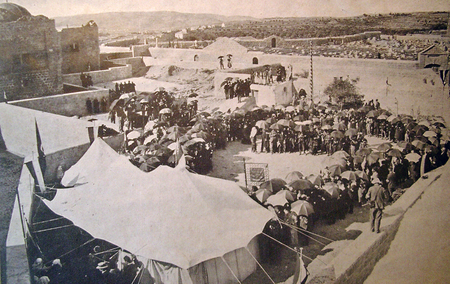 Blessing of the corner stone of Dormition (1907) Before the hundreds of local masons, stone carvers and other workers could arrive on Mount Zion to erect the new church and monastery designed by the archdiocesan architect of Cologne, the question had long been discussed, to which order the new shrine should be entrusted. The Emperor Wilhelm II did not want the local Franciscans, because this solution would not have had a German character. The Benedictines of Beuron had for a long time raised all possible objections to such a foundation. When finally the Pope, the Emperor and the Abbot Primate together intervened, they gave up their resistance. On October 7, 1900, when the cornerstone of Dormition was laid in the presence of a large group of German pilgrims, it was clear that the new monastery would be a Benedictine foundation. 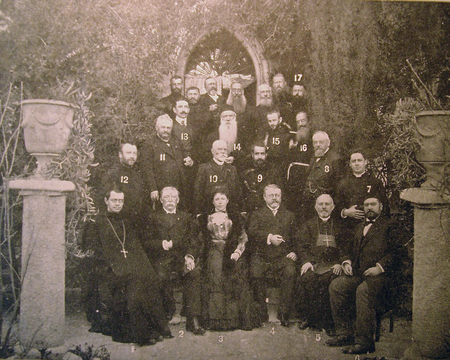 On the day of arrival of the monks in Jerusalem (March 21, 1906). On March 21, 1906, still in the middle of the building phase (the monastery was not yet completely ready for occupation and the church would require even longer), the first three Benedictine monks were greeted and introduced on to Mount Zion, among them Mauritius Gisler OSB, of Swiss origin and a monk of Beuron, who would live for many years on Mount Zion.