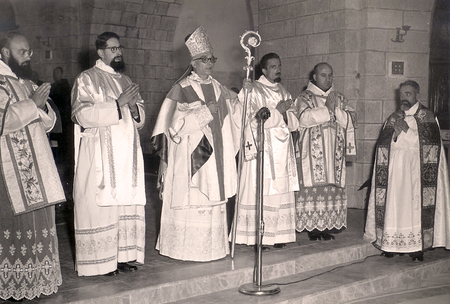 Abbot Leo (1953) When the first brothers returned to our monastery in March 1950, the community was only a shadow of its former self. Abbot Maurus had died a year before in exile in St. Charles in eyesight of his burning life work, now a battleground between Israelis and Jordanians. Some of the brothers had fled and found refuge in their former European monasteries, others in the USA.

A new beginning - once again

After the end of the war, Leo Rudloff OSB, from the Abbey of St. Joseph in Gerleve, was sent to evaluate the situation. He attempted a new beginning, once again. He negotiated with the Israelis and was able to repossess the monastery. He became prior and later abbot of Dormition. He himself had many contacts in the Jewish world and also led his Abbey in this direction, opening it to the new circumstances in a new state. He founded a daughter monastery in Weston, Vermont (USA) in order to improve and safeguard the vocation and financial situation of his monastery. However, the split across the Atlantic was not easy, and the two parts of the community in America and Israel developed differently. In June 1967 the six day war pulled the Middle East and Dormition into the next crisis. The shadows of the 1948 war had hardly been removed.

But now Jerusalem was again militarily united and completely under Israeli control. The Zion Gate, closed for twenty years, was once again open. And our brothers were once again able to go to pray at the Holy Sepulcher in the heart of the Old City.

Weston Priory, independent from Dormition since 1968, decided to go its own way. The following year Leo von Rudloff resigned as Abbot and went to live in Weston Priory. Once again our community stood at a crossroads in its history, which at this moment could also just as well have come to an end.